A map marked with crude chinagraph-pencil in the second decade of the 20th Century shows the ambition – and folly – of the 100-year old British-French plan that helped create the modern-day Middle East. 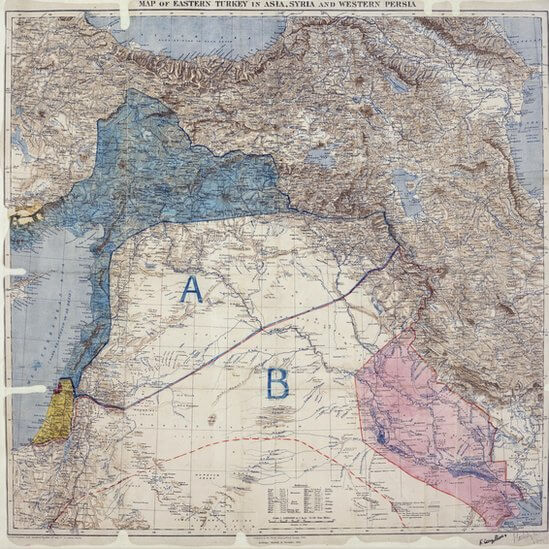 Straight lines make uncomplicated borders. Most probably that was the reason why most of the lines that Mark Sykes, representing the British government, and Francois Georges-Picot, from the French government, agreed upon in 1916 were straight ones.

Sykes and Picot were quintessential “empire men”. Both were aristocrats, seasoned in colonial administration, and crucially believers in the notion that the people of the region would be better off under the European empires.

Both men also had intimate knowledge of the Middle East.

The key tenets of the agreement they had negotiated in relative haste amidst the turmoil of the World War One continue to influence the region to this day. But while Sykes-Picot’s straight lines had proved significantly helpful to Britain and France in the first half of the twentieth century, their impact on the region’s peoples was quite different.

The map that the two men drew divided the land that had been under Ottoman rule since the early 16th Century into new countries – and relegated these political entities to two spheres of influence:

But there were three problems with the geo-political order that emerged from the Sykes-Picot agreement.

First, it was secret without any Arabic knowledge, and it negated the main promise that Britain had made to the Arabs in the 1910s – that if they rebelled against the Ottomans, the fall of that empire would bring them independence.

When that independence did not materialise after World War One, and as these colonial powers, in the 1920s, 30s and 40s, continued to exert immense influence over the Arab world, the thrust of Arab politics – in North Africa and in the eastern Mediterranean – gradually but decisively shifted from building liberal constitutional governance systems (as Egypt, Syria, and Iraq had witnessed in the early decades of the 20th Century) to assertive nationalism whose main objective was getting rid of the colonialists and the ruling systems that worked with them.

This was a key factor behind the rise of the militarist regimes that had come to dominate many Arab countries from the 1950s until the 2011 Arab uprisings.

The second problem lay in the tendency to draw straight lines.

Sykes-Picot intended to divide the Levant on a sectarian basis:

Lebanon was envisioned as a haven for Christians (especially Maronites) and Druze Palestine with a sizable Jewish community
the Bekaa valley, on the border between the two countries, effectively left to Shia Muslims Syria with the region’s largest sectarian demographic, Sunni Muslims Geography helped.

For the period from the end of the Crusades up until the arrival of the European powers in the 19th Century, and despite the region’s vibrant trading culture, the different sects effectively lived separately from each other.

But the thinking behind Sykes-Picot did not translate into practice. That meant the newly created borders did not correspond to the actual sectarian, tribal, or ethnic distinctions on the ground.

These differences were buried, first under the Arabs’ struggle to eject the European powers, and later by the sweeping wave of Arab nationalism.

Brutality
In the period from the late 1950s to the late 1970s, and especially during the heydays of Egypt’s Gamal Abdel Nasser (from the Suez Crisis in 1956 to the end of the 1960s) Arab nationalism gave immense momentum to the idea that a united Arab world would dilute the socio-demographic differences between its populations.

In the 1980s and 1990s, the Arab world’s strong men – for example, Hafez Assad and Saddam Hussein in the Levant and Col Muammar Gaddafi in North Africa – suppressed the differences, often using immense brutality.

But the tensions and aspirations that these differences gave rise to neither disappeared nor were diluted. When cracks started to appear in these countries – first by the gradual disappearance of these strong men, later by several Arab republics gradually becoming hereditary fiefdoms controlled by small groups of economic interests, and most recently after the 2011 uprisings – the old frictions, frustrations, and hopes that had been concealed for decades, came to the fore.

The third problem was that the state system that was created after the World War One has exacerbated the Arabs’ failure to address the crucial dilemma they have faced over the past century and half – the identity struggle between, on one hand nationalism and secularism, and on the other, Islamism (and in some cases Christianism).

The founders of the Arab liberal age – from the late 19th Century to the 1940s – created state institutions (for example a secular constitution in Tunisia in 1861 and the beginnings of a liberal democracy in Egypt in the inter-war period), and put forward a narrative that many social groups (especially in the middle classes) supported – but failed to weave the piousness, conservatism, and religious frame of reference of their societies into the ambitious social modernisation they had led.

And despite major advancements in industrialisation, the dramatic inequity between the upper middle classes and the vast majority of the populations continued. The strong men of Arab nationalism championed – with immense popular support – a different (socialist, and at times militarist) narrative, but at the expense of civil and political freedoms.

And for the past four decades, the Arab world has lacked any national project or serious attempt at confronting the contradictions in its social fabric.

That state structure was poised for explosion, and the changing demographics proved to be the trigger. Over the past four decades, the Arab world has doubled its population, to over 330 million people, two-thirds of them are under 35 years old.

This is a generation that has inherited acute socio-economic and political problems that it did not contribute to, and yet has been living its consequences – from education quality, job availability, economic prospects, to the perception of the future.

At core, the wave of Arab uprisings that commenced in 2011 is this generation’s attempt at changing the consequences of the state order that began in the aftermath of World War One.

This currently unfolding transformation entails the promise of a new generation searching for a better future, and the peril of a wave of chaos that could engulf the region for several years.

The Making of the Arab World, presented by Tarek Osman, can be found on the BBC Radio 4 website.

You can also read this article at this address:
http://www.bbc.co.uk/news/world-middle-east-25299553